The most common approach is to perform a standard simulation on a given model (Aluminum Heat pipe), then perform an adjoint solution that predicts the resultant sensitivities of that model to local changes made to it. Those small adjoint recommended changes are made and the process is repeated until such time as the model converges to an optimum state. Typical resulting geometries are often very ‘cool’ in nature and far from parameterisable. By way of an example to demonstrate this process, Figure 1 shows a quarter model of a circular base pin fin heatsink. 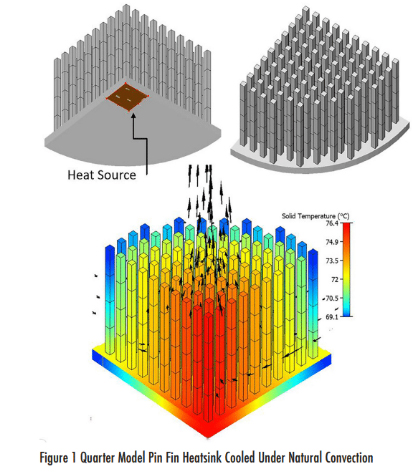 A heat sink can be discretised into a 3D collection of tessellated bodies such that for any location of the biggest Thermal Bottleneck body, a same-sized cuboidal body might be added to any of its air apparent faces. Similarly, any body might be removed allowing for holes to appear. For this example, a half model of a vertically oriented natural convection cooled heat sink is considered.

How to Select a Heat Sink