The heat pipe is a kind of heat transfer element, which makes full use of the principle of heat conduction and the fast heat transfer properties of the cooling medium. thermal conductivity. The heat pipe is a kind of heat transfer element, which makes full use of the principle of heat conduction and the fast heat transfer properties of the cooling medium. thermal conductivity.

Heat pipe technology has been used in aerospace, military and other industries before. Since it was introduced into the radiator manufacturing industry, people have changed the design thinking of traditional radiators and got rid of the traditional heat dissipation mode that relies solely on high-volume fans to obtain better heat dissipation.

Heat pipe technology has brought an opportunity to the quiet era of computers and has been widely used in other electronic fields.

·There are no active components, and it does not consume power itself.

Durable, long life, reliable, easy to store and keep. Why does heat pipe technology have such high performance? We have to look at this problem from a thermodynamic point of view.

The heat absorption and heat release of objects are relative, and whenever there is a temperature difference, the phenomenon of heat transfer from high temperature to low temperature will inevitably occur.

There are three ways of heat transfer: radiation, convection, and conduction, among which heat conduction is the fastest.

The heat pipe uses evaporative cooling to make the temperature difference between the two ends of the heat pipe very large, so that the heat can be quickly conducted. 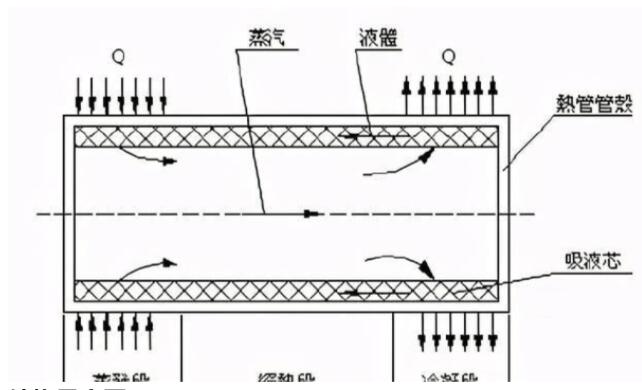 A typical heat pipe consists of a tube shell, a wick and an end cap.

The production method is to pump the inside of the tube to a negative pressure of 1.3×(10-1~10-4)Pa and then fill it with an appropriate amount of working liquid, so that the capillary porous material of the liquid absorption core close to the inner wall of the tube is filled with liquid and then sealed.

The boiling point of the liquid decreases under negative pressure, and it is easy to volatilize. The tube wall has a liquid-absorbing wick, which is composed of capillary porous materials.

One end of the heat pipe is the evaporating end and the other end is the condensing end.

When one section of the heat pipe is heated, the liquid in the capillary evaporates rapidly, and the vapor flows to the other end under a small pressure difference, releases heat, and condenses into liquid again.

The liquid flows back to the evaporation section along the porous material by capillary force, and the cycle is endless. The heat is transferred from one end of the heat pipe to the other end. This cycle is carried out rapidly, and the heat can be continuously conducted.

1. Heat is transferred from the heat source to the (liquid-vapor) interface through the wall of the heat pipe and the wick filled with working liquid;

4. The steam condenses on the vapor-liquid interface in the condensation section;

5. The heat is transferred from the (vapor-liquid) interface to the cold source through the wick, the liquid and the tube wall;

6. In the wick, the condensed working liquid is returned to the evaporation section due to capillary action.

The porous layer on the inner wall of the heat pipe has many forms, the more common ones are: metal powder sintering, groove, metal mesh, etc. Literally, the internal structure of this heat pipe is like charred briquettes or hot slag.

In the seemingly rough inner wall, there are all kinds of tiny holes, they are like capillaries on the human body, the liquid in the heat pipe will shuttle in these small holes, forming a strong siphon force.

In fact, the process of making such a heat pipe is relatively complicated. The copper powder is heated to a certain temperature. Before it is completely melted, the forehead edge of the copper powder particles will first melt and adhere to the surrounding copper powder, thus forming what you see now. to the hollow structure. From the picture, you might think it is very soft, but in fact, this hot slag is neither soft nor loose, but very strong.

Because it is a substance heated by copper powder at high temperature, after they cool, they restore the original hard texture of the metal. The internal structure of this heat pipe is designed like parallel trenches.

It also acts like capillaries, and the returning liquid is quickly conducted in the heat pipe through these grooves.

However, the processing technology of the heat pipe groove is more demanding. Generally speaking, it is the best design to follow the direction of the liquid return, so theoretically speaking, the heat dissipation efficiency is not as high as the former.

More and more common heat pipe radiators use this multi-metal mesh design. From the picture, you can easily see that the flocculent stuff inside the heat pipe is like a broken straw hat.

- Generally, the inside of this heat pipe is a metal fabric made of copper wires. There are many gaps between the small copper wires, but the structure of the fabric will not allow the fabric to dislocate and block the heat pipe.

From the perspective of cost, the internal structure of this heat pipe is relatively simple, and it is also simpler to manufacture.

Only one ordinary copper tube is needed to fill these multi-metal mesh fabrics. In theory, the heat dissipation effect is not as good as the previous two.

What is a heat pipe radiator

How do heat pipes work